The City of Kenora is asking some residents to vacate their homes immediately due to overland flooding in the city.

Thursday night, the City of Kenora issued an evacuation warning to residents asking them to voluntarily leave their homes. As of Friday, the situation has changed, with recent rainfall exacerbating an already-precarious flooding situation.

A corridor for safe passage out of the area is being set up and operated by city crews between 2:30 p.m. and 6:30 p.m. on Friday. After 6:30 p.m., the roads will be closed and there won’t be a point of entry or exit from the area.

Flood waters from the Black Sturgeon River have spilled into the basement of Rob Perchuk’s home.

“It was too much,” Perchuk said Friday as he was getting help from friends and family to protect his home. “It caught us off guard last night and we weren’t able to keep up with it.”

Water levels on lakes and rivers in the area have been rising over the past few days after heavy snowfall this winter and a series of spring rain storms.

The evacuation order has been issued for people in 361 properties.

“It’s mandatory from the perspective that this is the last chance that we’re going to keep the roads open in any shape or form until the water starts receding,” Readman said.

Crews were working Friday to keep roads open to give affected residents a way out. 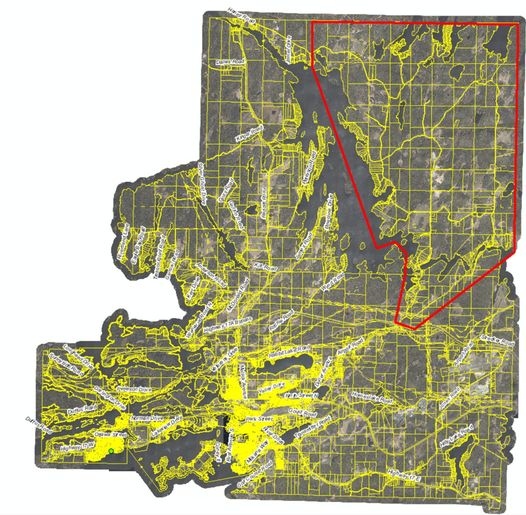 Map of areas in Kenora affected by overland flooding. (City of Kenora)

As of Thursday night, two roads in Kenora – East Mellick Road and Hooterville Trail – were experiencing water levels at a depth of 20 inches. Other affected roads had depth levels between 10 and 15 inches.

Water levels are expected to rise on East Mellick road to the point of becoming “unstable,” according to the Evacuation order, adding residents living south of the Portier bridge should be prepared to evacuate.

About seven roads are being affected by overland flooding, said Readman, adding city crews are still gathering up-to-date water levels on the roads.

“There’s becoming so much water over top of them that there is concern that there may be damaged caused at this point,” said Readman, “With so much water on top it’s hard to measure what’s going on underneath.”

While residents are being urged to evacuate immediately, folks can choose to shelter in place, said Readman.

The city is also encouraging anyone with cottages or vacation properties in the area of Kenora to stay away until the water recedes because other roads outside the city may also be impacted by flooding.

Officials said high water levels on Lake of the Woods and in the Winnipeg River system are causing back flow into the Black Sturgeon River system which is causing much of the flooding.

“I’ve been here all my life, 76 years,” said Joe Neniska, whose home is in the evacuation zone. “And we’ve only seen it twice before but the road was always passable.”

Neniska is one of those choosing to hunker down at home.

“We’re supposed to move out of the area or find another place to live or I think just put up with what we have until the water goes down,” he said.

Perchuk, who’s lived in his home for five years, isn’t prepared to leave either. He wants to stay and fight the flood waters.

“People like ourselves, we have our homes to protect and try to deal with,” Perchuk said. “We can’t just walk away from it.”

An evacuation centre has been set up at the Kenora Recreation Centre for those who are leaving their homes and have nowhere else to stay.