Ottawa police say officers moved in to clear an “aggressive crowd” off Rideau Street in Ottawa’s downtown core Friday evening, as demonstrators, motorcycles and vehicles blocked the streets on the opening night of the “Rolling Thunder” biker rally.

The sounds of motorcycle engines and sporadic chants of freedom filled the air of the Parliamentary Precinct in the late afternoon. Just after 7 p.m., a large crowd of people, some carrying Canadian flags, marched from Parliament Hill to the intersection of Rideau Street and Sussex Drive, blocking the road to all traffic.

“Due to an escalation of crowd aggression, officers are deployed in helmets and shields for their protection in order to clear the crowd at Rideau and Sussex,” Ottawa police said on Twitter.  Lines of officers from Ottawa police, the OPP and RCMP were seen moving into the area to disperse of the crowd.

After arrests earlier tonight, not much more movement down at Rideau and Sussex (Ottawa’s second hottest club)

A police line of at least three deep has pushed the crowd of a couple hundred back.

Many familiar faces from the convoy here, with customary freedom chants #cdnpoli pic.twitter.com/qMcR33dExR

Police temporarily closed the exclusion zone in the downtown core to all vehicles, “due to public safety.”

An 18-wheeler truck was parked on Rideau Street outside the Rideau Centre as people danced on the flat bed, while motorcycles were parked in intersections along Rideau Street and Sussex Drive.

“There have been no reported injuries, and police remain in full control of city streets,” police said in a statement, adding three vehicles were towed from the area of Rideau and Sussex.

The only event scheduled on the opening day of the “Rolling Thunder Ottawa” event was a Freedom Fighters Canada rally and march on Parliament Hill at 6 p.m.

The exclusion zone was set up from Waller Street to Bay Street, Wellington Street to the Queensway to prevent vehicles participating in the protest from entering the core. Roads were not closed, and police had said all pedestrian and vehicle traffic could enter and exit the area through the weekend.

“We have plans in place to actually manage people that are coming in. We continue to have those plans and we’ll execute them and exercise them,” Bell said Friday evening. “So you may see traffic disruptions, you may see an expanded control zone as we go through the city to make sure that we don’t see a repeat of February.”

The exclusion zone prohibits on-street parking and stopping all weekend due to the protest.

Between 7 a.m. and 4 p.m. Ottawa Bylaw officers had issued 185 tickets and towed 20 vehicles for no-stopping violations in the exclusion zone that covered the Parliament Precinct area and the ByWard Market..

The first of 500 motorcycles and other vehicles expected to arrive in Ottawa this weekend were spotted downtown through the afternoon, while people carrying Canadian flags walked along sidewalks up to Parliament Hill chanting ‘Freedom.”

CTV News reporter Glen McGregor reported dozens of vehicles were in Kaladar on Hwy. 7, ready to join up with Rolling Thunder in the capital. The vehicles were covered in Canadian flags.

Ottawa police said Friday afternoon that it was aware of convoys headed to Ottawa for the event, but warned they will not be allowed downtown. Ontario Provincial Police said there will be temporary exit closures on Hwy. 417 through the weekend due to the protest.

“Please be advised that your convoy will be diverted and you will not be able to stop or remain on area roadways,” Ottawa police said on Twitter.

The organizers of “Rolling Thunder Ottawa” have not said much about the reason for the rally.  Neil Sheard told the Evan Solomon Show this week that it’s a “bike rally to help heal and give back that dignity to the (National War Memorial) that was desecrated by the powers that be.”

Rolling Thunder said on its website earlier this week it does not “support blockades, obstruction of police performing their duties, damage to property, or hate and vitriol directed to the residents of Ottawa.” 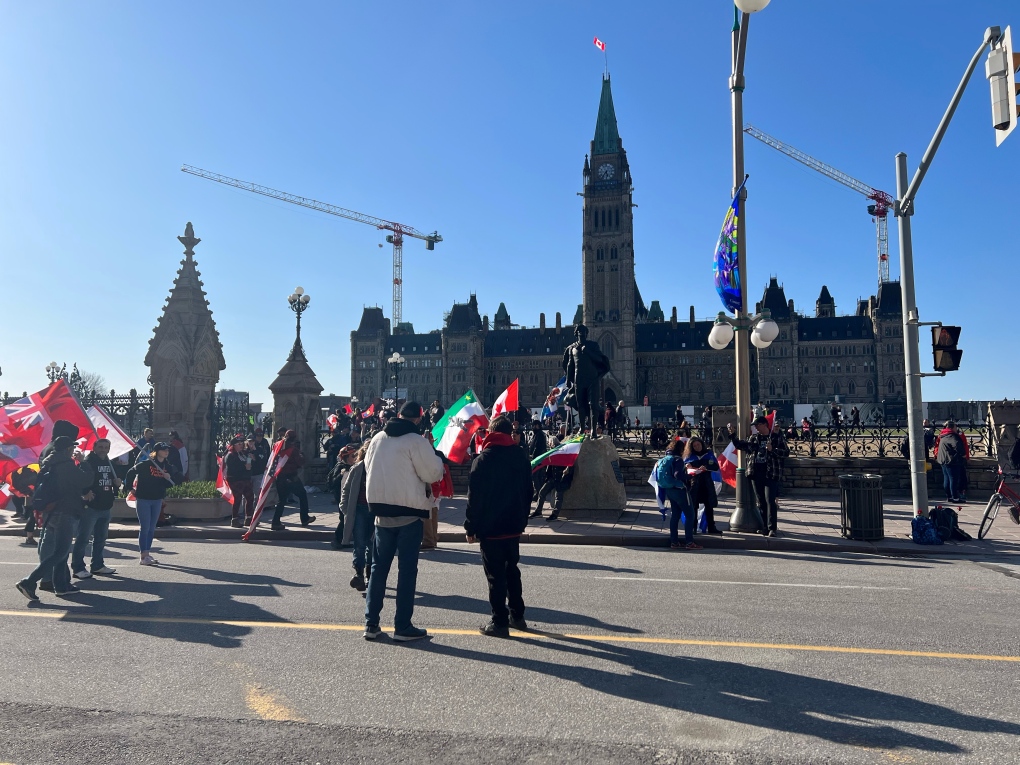 People gather on Wellington Street in front of Parliament Hill on Friday evening at the start of the “Rolling Thunder Ottawa” event. (Jeremie Charron/CTV News Ottawa)

There was a small group of people at the National War Memorial on Friday afternoon.

Police say there will be temporary exit closures due to “ongoing events” through the weekend.

“The one message I leave to them is you’re coming into someone else’s neighbourhood, be respectful, recognize that there are kids – this is probably the first nice weekend we’ve had this year, there will be kids playing on the streets,” Watson said on CTV Morning Live.

The city insists downtown roads and businesses are open for business, but residents and tourists should expect to see a heightened police presence through the weekend.

Officers are in place throughout the downtown area and are keeping eyes on movement within downtown,” police said on Twitter. “Today is a regular business day so you can expect to see vehicles and trucks who have business within the vehicle exclusion zone.”

City barricades, heavy equipment or police officers and vehicles will be at various intersections across the city. Police say roads are not closed in the exclusion zone, and residential and business traffic, as well as pedestrians, cyclists and public transit are permitted.

The “Rolling Thunder Ottawa” event comes two months after the Freedom Convoy demonstration that occupied the Parliamentary Precinct for three and a half weeks.

“It is the disruption and what comes with this type of convoy that’s coming.”

Watson says the city is ready for this event.

“I’m very confident the police have a good plan; they have the resources to implement that plan, to ensure the protection of our businesses, our small businesses to ensure that we don’t see a repeat of what happened in February which was very hurtful and harmful to so many people in the central core of the city,” the mayor said.

CSO says they wanted to do something to send a message to the Rolling Thunder biker rally that they are not welcome in Ottawa. The event also aims to publicly demonstrate how much of a disruption the convoys have had on Centretown residents.

“I’m concerned with both the impacts that it may have on our communities, the disruption it may cause,” said Brian Latour, organizer of the event. “But I’m also concerned with the politics behind these convoys. They are very far-right, hate filled, conspiratorial minded, anti-democratic politics which pose a threat to our safety and democracy.”

Latour says the message from the event is people don’t want to see more protests in Ottawa. 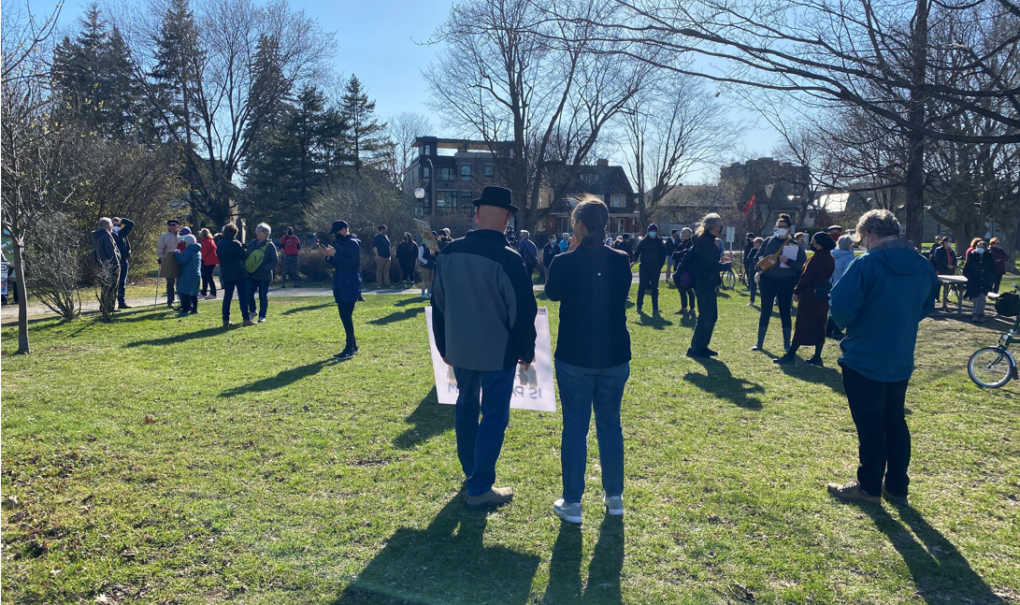 The mayor was asked about residents hosting counter-protests this weekend.

“As long as they don’t get into a position that they put themselves in danger or there’s a confrontation, the last thing we need is to split the resources of the police by dealing with another challenge,” Watson said on Friday. “I admire the people who want to fight back and push back; but please don’t put yourself in danger, let your voices be heard but don’t get into a situation where the police have to come in and break up a situation.”

Ottawa Bylaw says enforcement will begin at 7 a.m. for vehicles violating the Special Event No Stopping Zones in the exclusion zone.

The exclusion zone for no stopping and no parking is Waller Street, Wellington/Rideau street, Bay Street and Laurier Avenue.

Ottawa City Hall and the underground parking lot are now closed for the weekend.

The city says City Hall and the parking lot are off-limits to the public until Monday.