A couple has literally taken their love to new heights. In fact, at about 37,000 feet.

A Southwest flight from Dallas to Las Vegas last Sunday was transformed into a makeshift wedding chapel, complete with toilet paper streamers and a flight attendant’s maid of honor.

Pam and Jeremy Salda have been dating since August 2020 and told CNN that when they heard the news of some airlines lifting the mask mandate they joked about eloping in Las Vegas last Tuesday.

And then her joke turned serious.

“Within about an hour and a half we had booked our flights and hotel,” said Jeremy Salda on Friday. “Pam bought a wedding dress online and left it overnight.” 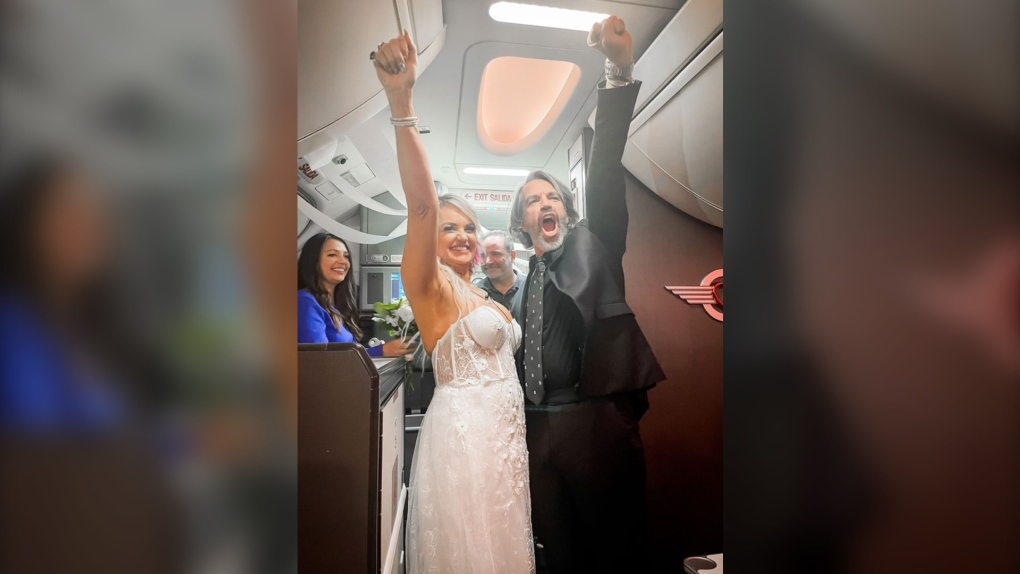 A Southwest flight from Dallas to Las Vegas last Sunday was transformed into a makeshift wedding chapel, complete with lines of toilet paper and a flight attendant’s maid of honor for Pam and Jeremy Salda. (Kaitlyn Manzer)

The Oklahoma City couple scheduled an appointment at the wedding chapel at 9 p.m. Sunday night.

With Pam Patterson (now Pam Salda) in her wedding dress and Jeremy in a suit, the two headed to Sin City.

But during her layover at Dallas/Fort Worth airport, several delays occurred and eventually her last flight to Vegas was cancelled.

While waiting at the terminal, they met Chris Kligora, another passenger on the same flight to Vegas who happened to be an ordained minister.

He overheard their wedding adventure and offered to marry the couple himself in Vegas. From there, the three found a Southwest flight to LAS with only four seats left

However, that flight was scheduled to depart from Dallas Love Field (DAL) Airport, which was about 25 minutes away. “We had 50 minutes before the plane took off,” Pam told CNN. “We told Uber to get off the ground, and it did.”

As they ran through DAL in their wedding attire, the couple said people shouted congratulations to them.

They finally made it to the gate and when they boarded the captain was curious about Pam’s wedding dress. She explained the story and joked about getting married on the flight.

To her surprise, the pilot replied, “Let’s do it!” 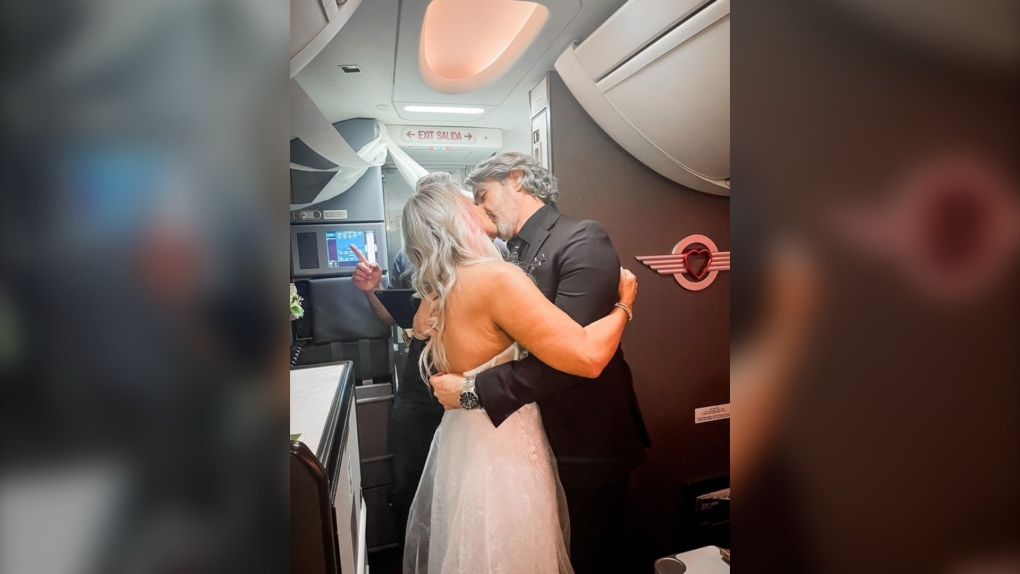 A Southwest flight from Dallas to Las Vegas last Sunday was transformed into a makeshift wedding chapel, complete with lines of toilet paper and a flight attendant’s maid of honor for Pam and Jeremy Salda. (Kaitlyn Manzer)

“Southwest has been the airline of love for nearly 51 years,” Southwest said in a written statement to CNN. “We always relish the opportunity to celebrate our customers in a special way.”

Flight crew members hung streamers out of toilet paper and made Kligora a sash out of snack bags.

As Pam walked down the aisle, other passengers flipped their call buttons and Julie Reynolds, one of the flight attendants on board, stepped in as impromptu maid of honor.

A professional photographer happened to be on board taking photos of the newlyweds. And as for cutting the wedding cake? Another passenger offered his leftover powdered donut.

“It’s so weird how it all came together,” Pam said.

Even a notebook was passed around as a makeshift guest book. Pam says the other passengers left messages inside about how the unexpected wedding brightened their day or how they felt like they were watching a romantic comedy.

“We were thrilled to host Pam and Jeremy’s special day. Congratulations to the newlyweds and best wishes in their new life together,” Southwest said.

The newlyweds spent an extra day in Vegas to celebrate their impromptu wedding.

They plan to hold their originally scheduled ceremony in August, where they will celebrate with family and friends in Cabo San Lucas, Mexico.

Now, however, they have a few additional wedding guests who are invited: their Deputy Minister and the flight attendants.