A 28-year-old international student who was critically injured during a deadly shooting rampage across the Greater Toronto Area has succumbed to their injuries.

The Milton, Ont. shooting occurred around 2:50 p.m. on Sept. 12, less than an hour after a gunman killed Toronto police Const. Andrew Hong in an “unprovoked” ambush-style attack inside a Tim Hortons in Mississauga.

Investigators say the suspect, who they have identified 40-year-old Sean Petrie, waited at the coffee shop for hours before shooting Hong at close range. He then went across the street and carjacked another victim before continuing to Milton, where he shot three more people at an auto repair shop.

The shop owner, known as 38-year-old Shakeel Ashraf, was pronounced dead at the scene.

Satwinder Singh, an international student from India who was working part-time at MK Auto Body Repairs, was also shot. Police said earlier this week that he was not expected to survive.

In a news release issued Saturday, police said that Singh died peacefully at Hamilton General Hospital with friends and family at his side.

“This is heartbreaking news for our community which hasn’t even begun to heal from Monday’s traumatic events. I urge everyone to reach out and ask for help if they need it,” Halton Regional Police Service Chief Stephen Tanner said in a statement.

The third victim was also an employee of MK auto repairs and was shot in the leg. Police say the 43-year-old is recovering at home.

The gunman believed to be responsible for both the Mississauga and Milton incidents died following a shootout with Halton police in Hamilton. The provincial police watchdog is investigating. 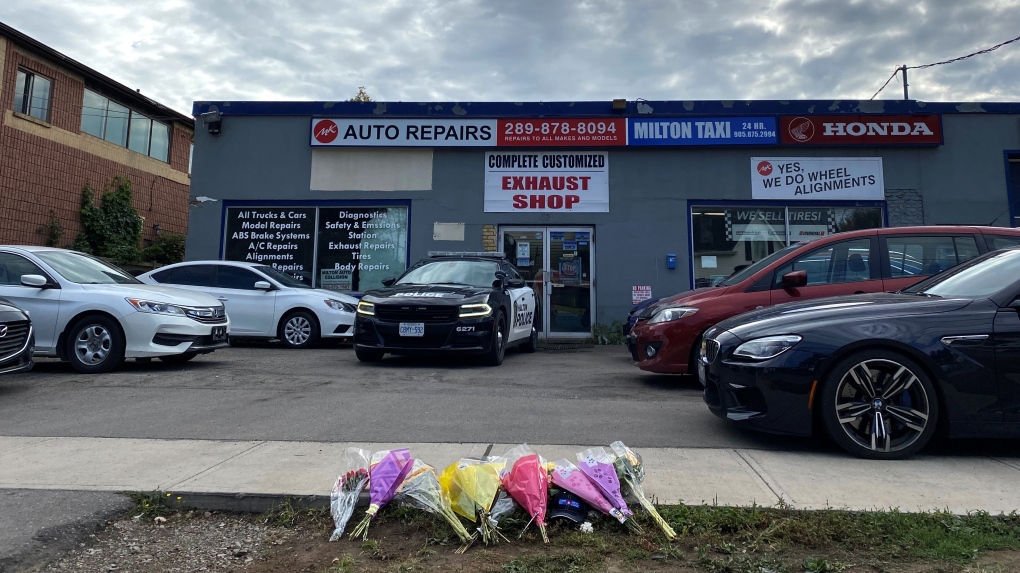 Flowers are laid outside a business in Milton, Ont., Tuesday, Sept. 13, 2022. Shakeel Ashraf, who owned MK Auto Repairs, was shot and killed during a string of shootings across the Greater Toronto and Hamilton Area. THE CANADIAN PRESS/Holly McKenzie-Sutter

Few details have been released about the motive behind the shooting, but investigators have said they believed Petrie was “looking for a police officer” in Mississauga and that Hong was “deliberately targeted.”

Police also said that Petrie was known to police and had an extensive criminal record, which included convictions for assault, armed robbery, and carrying a concealed weapon.

The last conviction was in 2015 for a criminal driving offence, police said.

According to a cousin of the shop owner, Petrie was a former employee at MK Auto Body Repairs.