A Ukrainian family says the agony of the war in Ukraine was made worse by what they call “impossible” requests from Immigration, Refugee and Citizenship Canada (IRCC), including a demand for their daughter’s birth certificate just days after she was born in the bomb shelter of a maternity hospital in the ravaged city of Chernihiv.

Serhii Levchenko is sharing his family’s harrowing journey exactly one week after eventually landing in Toronto with his wife and two daughters.  A third daughter was already away, studying in Moncton, N.B.

Most men Levchenko’s age are banned from leaving Ukraine to participate in the war effort.  But fathers with three children or more — or those with medical exemptions — are permitted.

In the hours before March 6, when baby Sophie was born, Levchenko and his wife, Anna, were forced to separate: she was at the maternity hospital and he was stuck at his apartment with his four-year-old daughter Alisa.

That’s when his neighborhood was being battered by Russian bombs.

He immediately grabbed his daughter.

“I just covered her because in that period the bombing was huge. Just praying that it’s not going to pass to our building.”

Anna had heard about the attack but had no way of getting through to her husband.

“Up to the morning, she doesn’t know if we were alive or not,” Levchenko said.

Phones had to be shut off at night so they could not be traced by Russian intelligence.

She immediately suspected the worst.

Fortunately, they survived, but the family says they weren’t ready for the next battle: coming to Canada.

They had already started the process, but needed a visa for baby Sophie, born in a war zone.  The family says Canada demanded a birth certificate for the child.

Thousands of kilometres away in Toronto, Nick Zotkin – originally from Ukraine – and his partner, Rob Esselmont, heard about the Levchenkos’ struggles through an online network and immediately jumped in to help.

“How a birth certificate can be issued when she gave birth in a shelter?” said Zotkin.

Zotkin and Esselmont, who have already spent $20,000 of their own money, are working on their own time to bring a total of 17 Ukrainians in seven families to Canada, and describe the bureaucracy as “a nightmare.”

“The right hand does not talk to the left.  And it’s so infuriating,” Esselmont said. 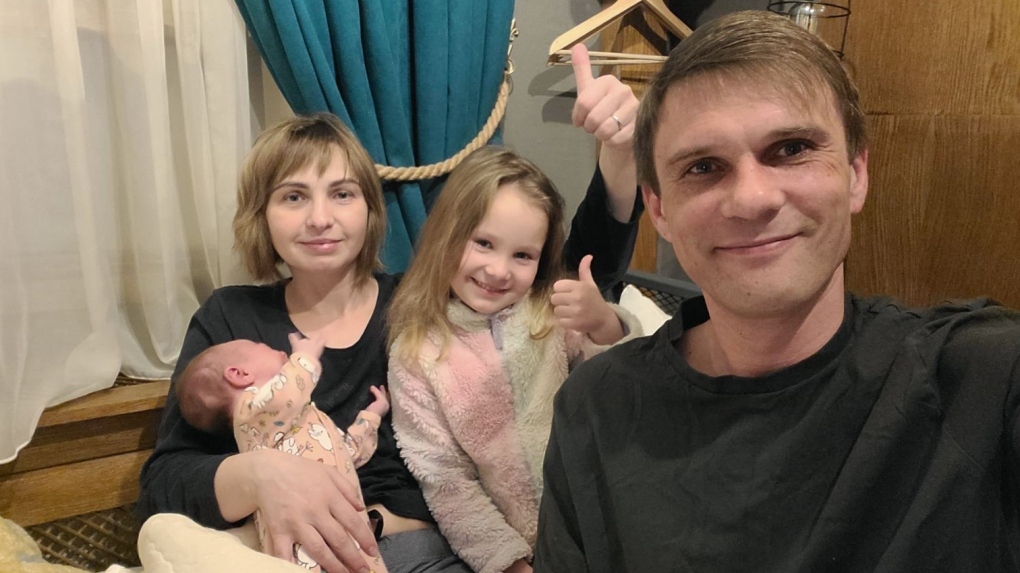 Serhii Levchenko is sharing his family’s harrowing journey from Ukraine after eventually landing in Toronto with his wife and two daughters.

Inside their condo in what they call their “mini immigration office,” the couple has hung passport photos of the families they are trying to bring to Canada.

“It makes you feel insignificant. Like these people don’t mean something.  And they do,” Esselmont said, pointing to the picture of the Ukrainians he wants to help.

“They’re still sitting, sitting and waiting to get here. We have a job for her.  We have a place for her to live.  Her son created this shirt,” he adds, explaining that the child created the artwork for a T-shirt fundraiser the couple started to help Ukrainian families. 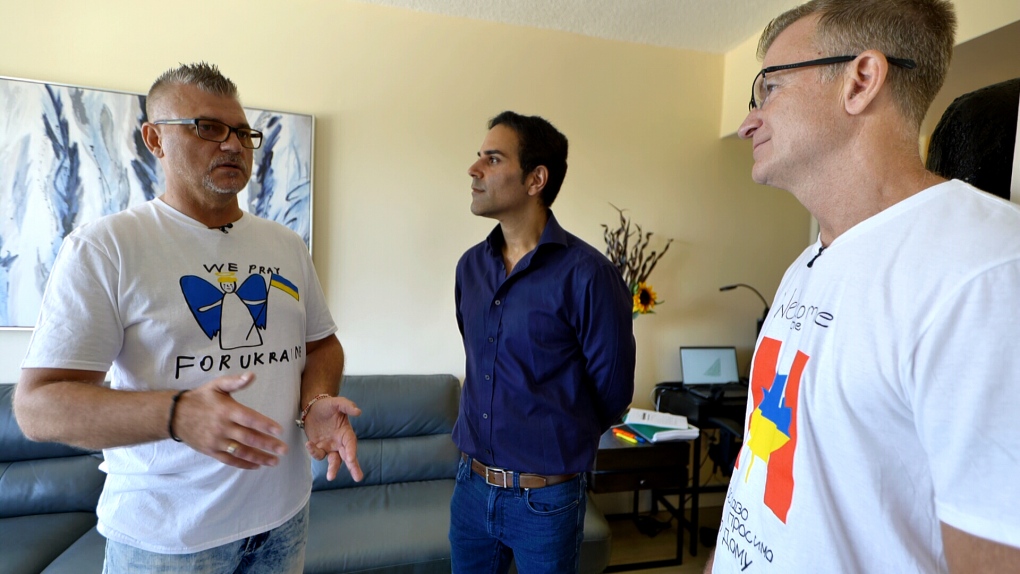 CTV News’ Omar Sachedina speaks to Rob Esselmont and Nick Zotkin, who are working to help Ukrainians come to Canada.

While most of the people Esselmont and Zotkin are trying to support are still waiting abroad, the Levchenkos are trying to start a new life in Canada before Serhii, who is a seaman, has to leave for Japan at the end of the month.

The family spent two months collecting the necessary paperwork, travelling to five different countries on their way to Canada. Most recently they were in Istanbul, Turkey waiting for baby Sophie’s visa.

Zotkin knew an Airbnb host there who offered a cut rate on an apartment. The issues around the baby’s birth certificate were eventually resolved, allowing the family to come to Canada.

Serhii said the journey to Canada would not have been possible without the support of the two men he didn’t even know.

And now, he says he has the freedom to dream again, explaining that one day he would like to have “a big house with a swimming pool, nice business… up to the end of our days” in Canada.

But in the short term, there will be other priorities: baby Sophie.

Serhii says at just two months old — born three days after his birthday — his daughter symbolizes the resilience of the Ukrainian people.

“The kids who were born in this period, I think this is the strongest people in the world.”